I feel like I need to start putting series into numerical order by how good they are…there’s a quasi-ranking in my head right now, but it’s certainly not defined at all. And this series is near the top at the moment. But I don’t know what’s above and below because I really haven’t taken the time to figure it out. And then, I think about that, and I feel pretentious. Which is part of the reason why I haven’t done any sort of ratings/rankings. I prefer to ramble 🙂 At least then, its fine if I don’t sound like I know what I’m talking about! 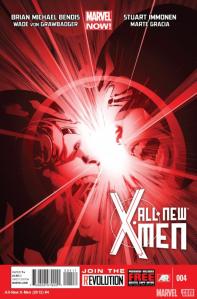 Before we go too far, can I just say how much I LOVE this cover? I mean, it’s not the most intricate cover ever seen, but I think it conveys exactly what you’re going to see once you open up the comic. Cyclops and Young-Cyclops are going to go head-to-head at some point, yes. But if you look even farther than that, at their expressions – they’re both going to be affected by this. This isn’t a one way street. This isn’t Young-Cyclops makes Cyclops see the error or his ways and the Young X-Men can go skipping back to their own timelines. They’re both going to have to deal with the consequences of what’s about to happen. And it isn’t going to be fun for either party.

So this story starts right where #3 left off, with the two groups of X-Men staring each other down. Which was probably a blessing in disguise. If they had started anywhere else and come back, I probably would have skipped the beginning 😛 I loved the fight scene…that really wasn’t so much a fight as Cyclops trying to figure out what’s going on, Jean hearing everyone’s thoughts and not being able to handle it, and Cyclops power going rogue again (though I think that might have been Jean knocking him onto his face…and then the visor coming off…I’m not quite sure on that one!)

As interesting as the fight was, I think the more interesting part is just how affected both sides are…and how similarly both sides intially handle it. They’re both sitting on their own, staring off into the distance. But that’s when the two diverge. Young-Cyclops goes back with his friends even when they are mistrustful of him, whereas Cyclops is really pushing Emma Frost away…he wants to be alone, and she is just intruding. It’s a good comparison for how similar and how different the two of them are.

I’m also glad we got to catch a glimpse of the two new mutants from the first issue. Even if it’s only for a page, it’s good to know they haven’t just fallen by the wayside!

And of course, no All New X-Men would be complete without a cliffhanger than made you beg for the next issue. And this time it’s given to us by Hank, who is going into cardiac arrest. Thank you Bendis…for making me scream at a comic book so loudly I’m sure the people outside could hear. 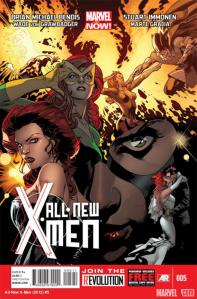 This issue, more than any of the issues so far, should be called the drama issue! We have Young-Hank trying to cure himself by crawling up and down all the equipment like it’s a jungle-gym (one of the more amusing moments was a quick frame when he was hanging upside-down by his feet). You have what’s going on in Hank’s brain with Jean, who show’s Jean essentially her whole life story (Isn’t there some sort of time traveling law against showing someone how they die? That usually isn’t wise…). From there we go outside where Wolverine is holding a vote on whether or not to kill Young-Scott right then and there, only to be interrupted by the miraculous re-emergence of Hank. He then tries to send the young X-Men away, only to have Jean stop him, hold a vote and have all but one of the Young X-Men decide to stay (I felt kind of bad for Angel…and he does have a point. We haven’t see his counterpart anywhere…) This was enough of a roller coaster ride even without any action.

I was glad we got to see Older-Scott again, and someone went to collect chameleon-face-stealer guy. It was also nice to see some progress made on his school. Nice…but a little ominous at the same time…

I worry for Jean in this series…It’s only been five issues and she’s already been put through the wringer…and more than likely, it’s only going to get worse. And really, what’s going to happen if she just continues to get stronger and stronger, long before she was supposed to? I don’t really understand how her abilities work, but somehow I think this is not a good thing…